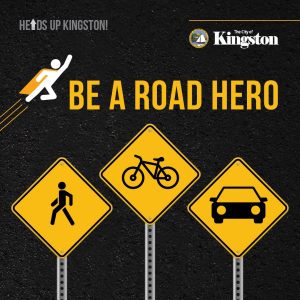 Like all modern media, integrated marketing can be influenced by current events. A seemingly unrelated news item can cause significant changes to an established strategy. As a strategic marketing and creative services firm in the New York market, Niki Jones Agency is used to adapting with changing circumstances to make sure the right audience gets the right message at the right time. Such was the case this summer when soaring gas prices caused a spike in pedestrian traffic, and a road-reconfiguration public awareness campaign became a broader matter of public safety.

Our client, the City of Kingston, NY implemented a number of transportation projects, resulting in changes to traffic patterns and thus creating a need to educate residents on multiple traffic safety concerns pertaining to motorists, cyclists, and pedestrians. These included alterations to major streets, installation of cycle tracks, traffic signal upgrades, and ADA-compliant curbs and sidewalks.

As such, an awareness campaign based on the nationally successful “Heads Up” initiative was planned to get motorists, cyclists, and pedestrians to take notice. No sooner had these streetscape changes come to fruition, however, than a global petroleum crisis and a corresponding rise in gas prices led to a nation-wide influx of foot traffic.

Traveler confusion, crashes, and dangerous near misses had already affected the City’s roads for years. Nearly 30 crashes occurred at one major intersection between 2013 and 2018, with seven of those incidents resulting in injuries. With so many more pedestrians and cyclists coming to Kingston’s streets and sidewalks, a simple “heads up” would no longer suffice. Our campaign’s messaging was instead adapted to ask each traveler to “be a road hero” and look out for others.

“The goal of ‘Be A Road Hero’ and its corresponding street configuration and traffic control changes is a safer streetscape with fewer collisions,” said Mayor Steve Noble.

Although originally intended as a public awareness campaign focused on road configuration, this project became a study in how a well-strategized, carefully targeted campaign creates a dependable model for disseminating adaptable messaging.

Niki Jones Agency brings its blend of strategy and creativity to each project, giving our clients both stability and flexibility. Our approach to data analysis and market research integrates with our artistic flair to create custom, replicable campaigns that drive action and even save lives. Just as importantly, our thorough crisis communication plans keep your organization prepared for circumstances not anticipated in the master strategy. To learn more about our agency’s strategic marketing services, click here. https://www.nikijones.com/strategic-marketing/

Comments are closed, but trackbacks and pingbacks are open.